Cop of the Month 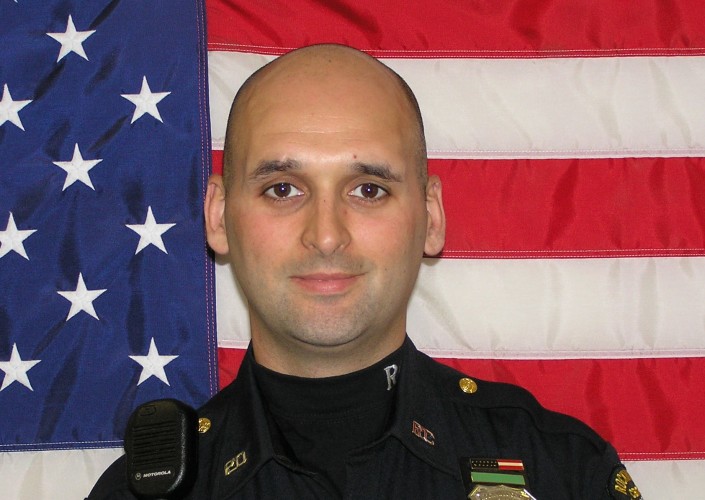 In recognition of his dedicated performance of duty that resulted in the arrest of a subject for menacing and criminal possession of a weapon, P.O. Siraco is hereby designated “Cop of the Month.”

On Friday, March 20, 2015, at approximately 0058 hours, while on patrol, P.O. Siraco responded to Croxley’s Ale House, 7-9 S. Park Avenue, for a report of a male subject acting suspiciously after he was asked to leave by the staff due to his disorderly conduct inside the premise. It was reported that the subject was standing outside of the front window, using his hand to simulate a firearm in a threatening manner towards the staff inside the establishment.

Upon arrival, P.O. Siraco interviewed the caller and began to search the area for the subject along with other responding officers. While searching the area, P.O. Siraco was informed by a passerby that there was a male subject in the parking lot to the rear of Croxley’s Ale House looking into parked cars and that he had entered a black Infiniti motor vehicle that was parked in the lot. P.O. Siraco quickly located the vehicle and observed the operator of the vehicle violate the posted ONE WAY sign in the parking lot. P.O. Siraco notified the other responding officers
assisting in the search for the subject of his location and initiated a vehicle stop. The subject stopped the vehicle, exited the driver side door and fled on foot, southbound on S. Park Avenue.

After a short foot pursuit P.O. Siraco was able to subdue the subject and place him into police custody. Witnesses from Croxley’s Ale House positively identified the subject as the same individual that was making threatening gestures in front of Croxley’s Ale House just minutes earlier. As P.O. Siraco was securing the defendant’s vehicle, an illegally possessed, fully loaded firearm, was observed on the front seat of the vehicle within reach of where the subject had been sitting inside the vehicle.

For the diligence, dedication to duty, and highly professional conduct that P.O. Siraco displayed in regard to this occurrence, it is my pleasure to congratulate him on a “job well done!”
– Commissioner Charles Gennario